Today, May 23, marks my eleventh day traveling in Poland, and my second day in Kraków.

We began our morning with breakfast in the hotel lobby at 6:00am. At 6:30am, we boarded our bus-the same one that took us to and from the airport-and started the hour-long drive to Oświęcim for a somber visit to the Auschwitz-Birkeneau-Monowitz concentration camps. 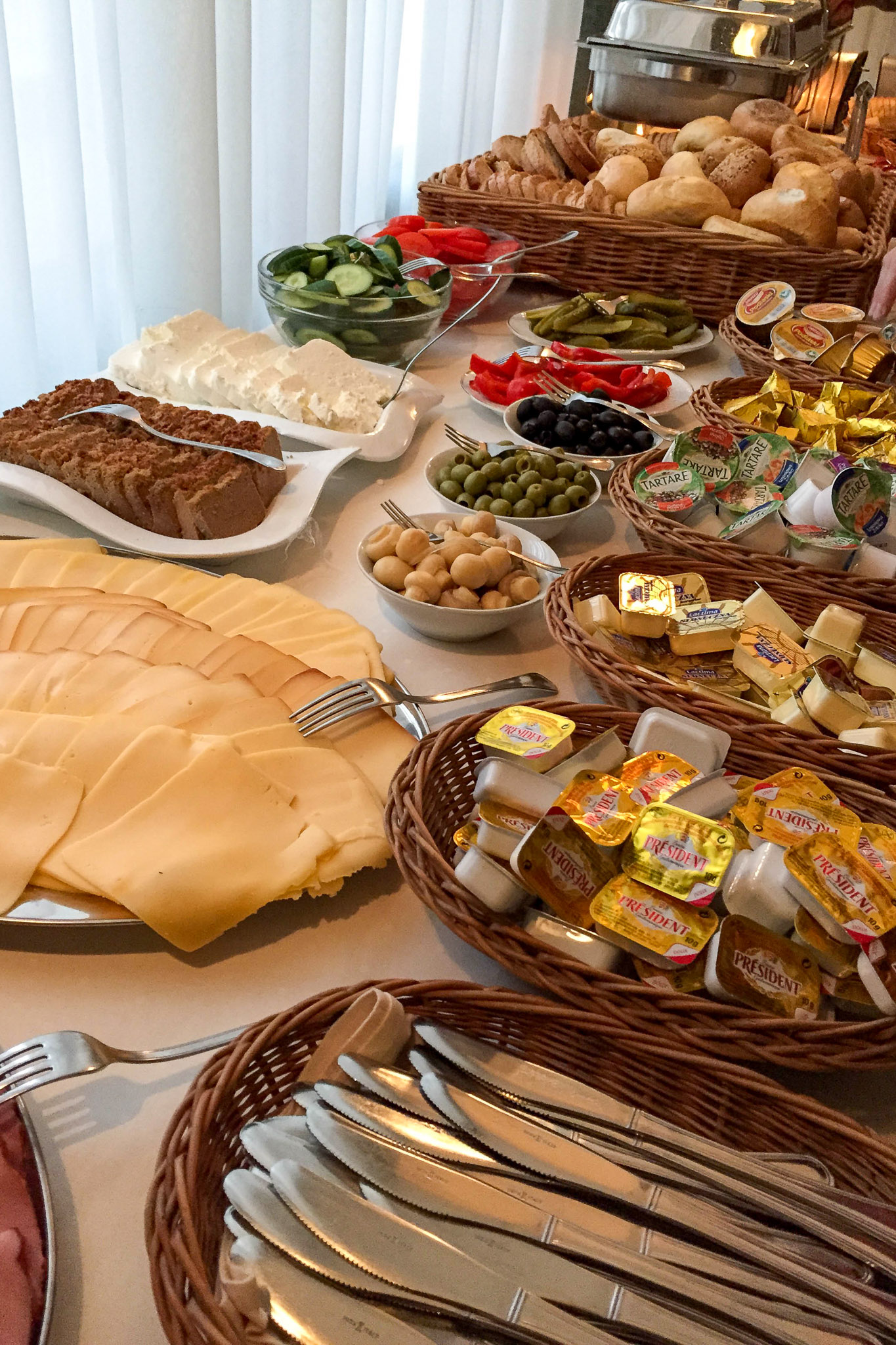 Upon our arrival at Auschwitz, we unloaded the van and walked over to the security checkpoints so we could enter the camp. Our tour guide provided us with wireless headphone systems so we could hear him properly throughout the entire tour without excessive speaking volume. We began our tour by walking through Auschwitz I concentration camp, which was originally barracks for German soldiers. The conditions here were often not as bad as the Auschwitz II-Birkeneau camp, but it was still a nightmarish place to be. We toured the barracks, gas chambers, offices, prison, crematorium, and more. There were many exhibitions of artifacts, which were presented as evidence of the crimes committed here by the Nazis, including tons of human hair, piles of eyeglasses, mounds of suitcases and baskets, mountains of shoes, seas of dishes, and more. Rather than writing about the details of the exhibits, I will simply post a few pictures. We were not allowed to photograph in several places, so what I have is slightly limited. 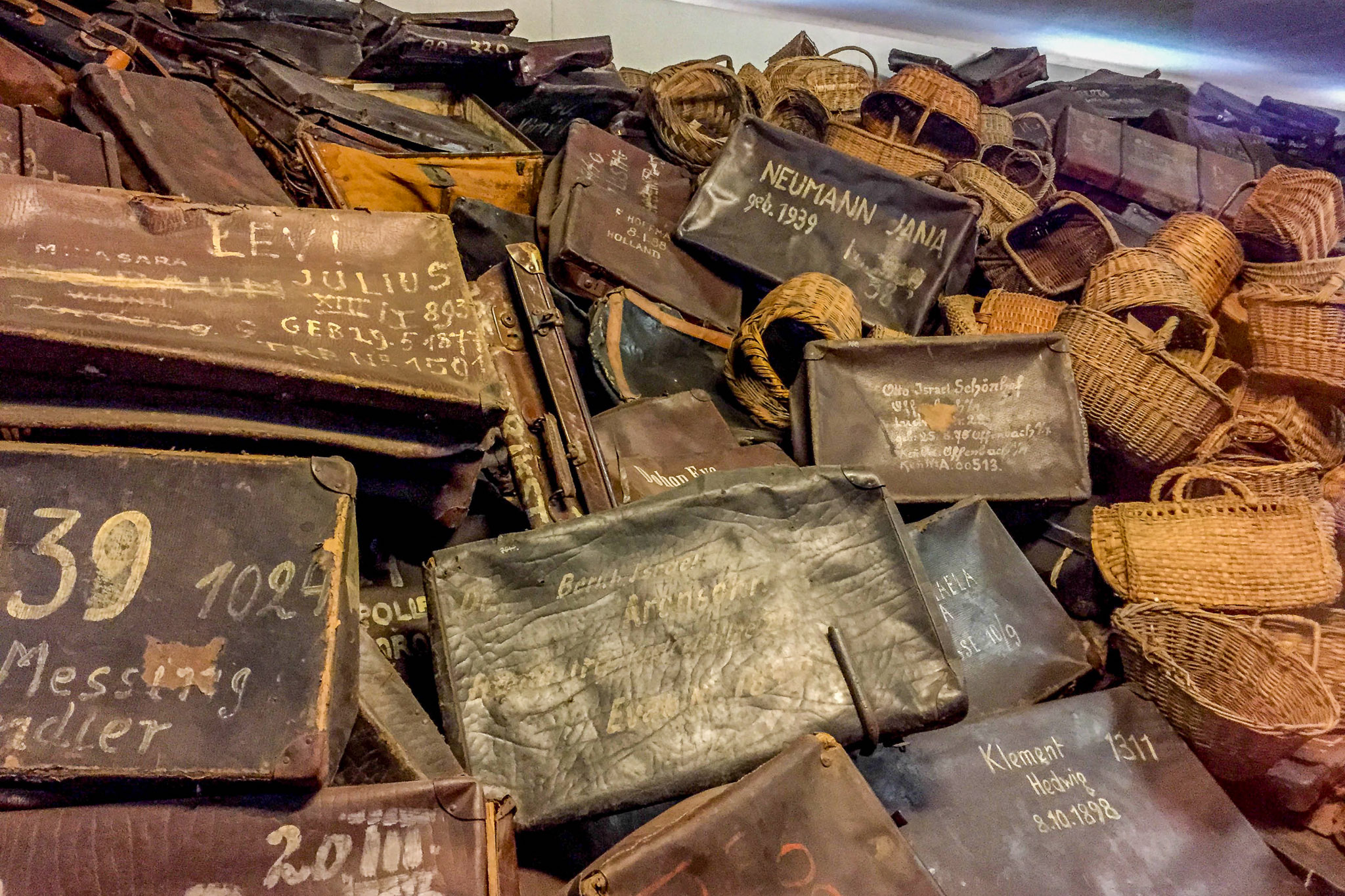 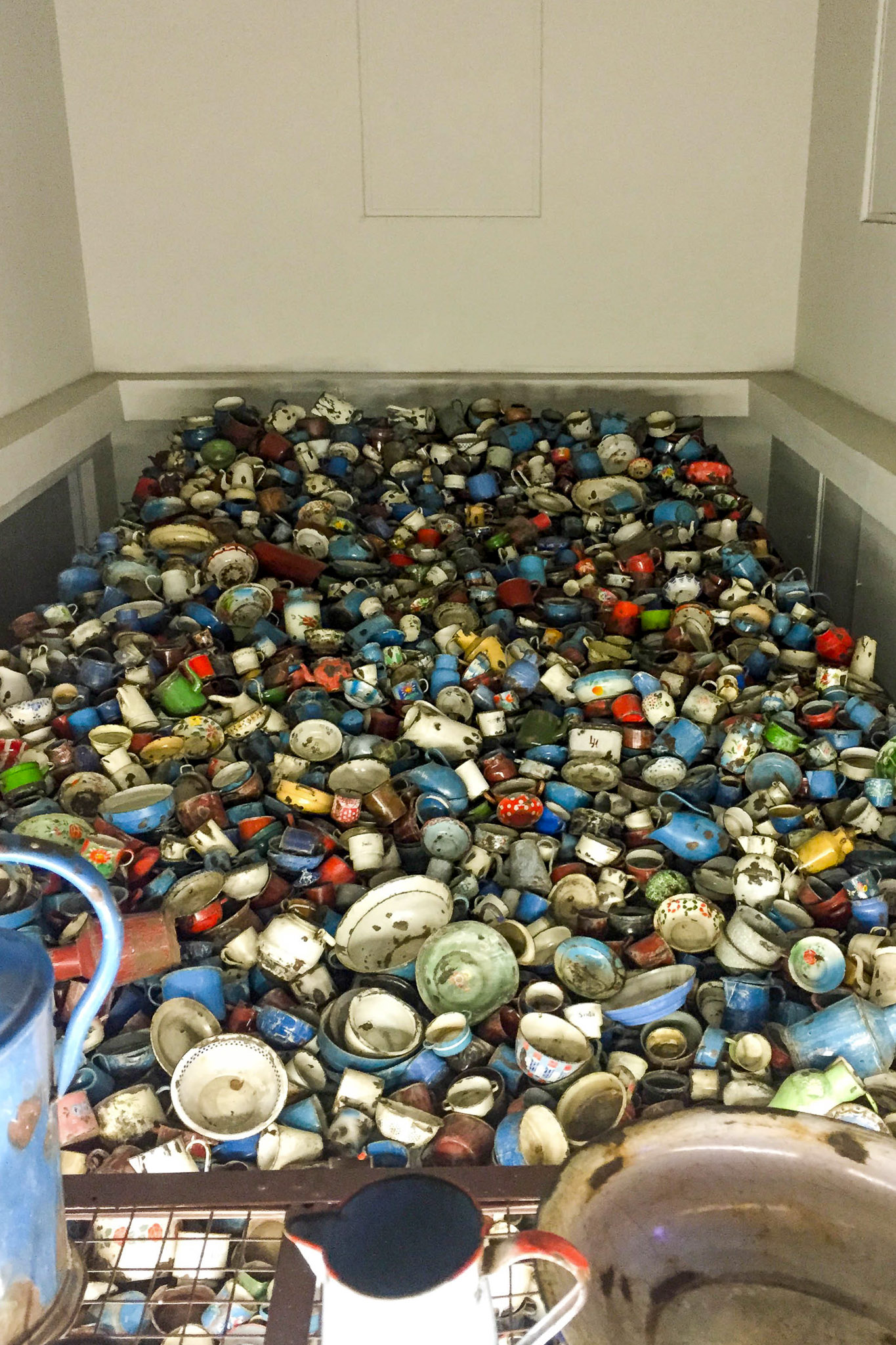 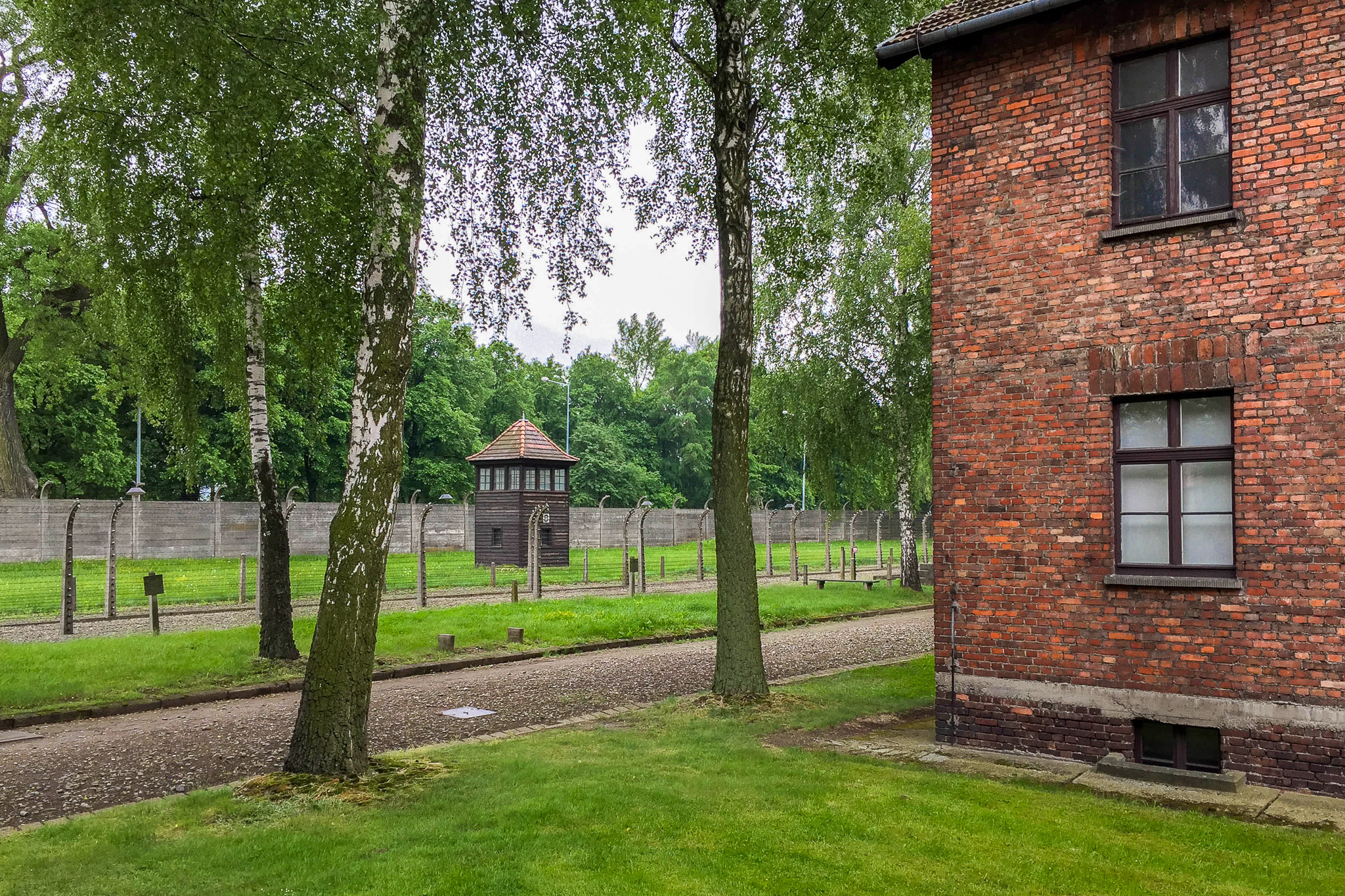 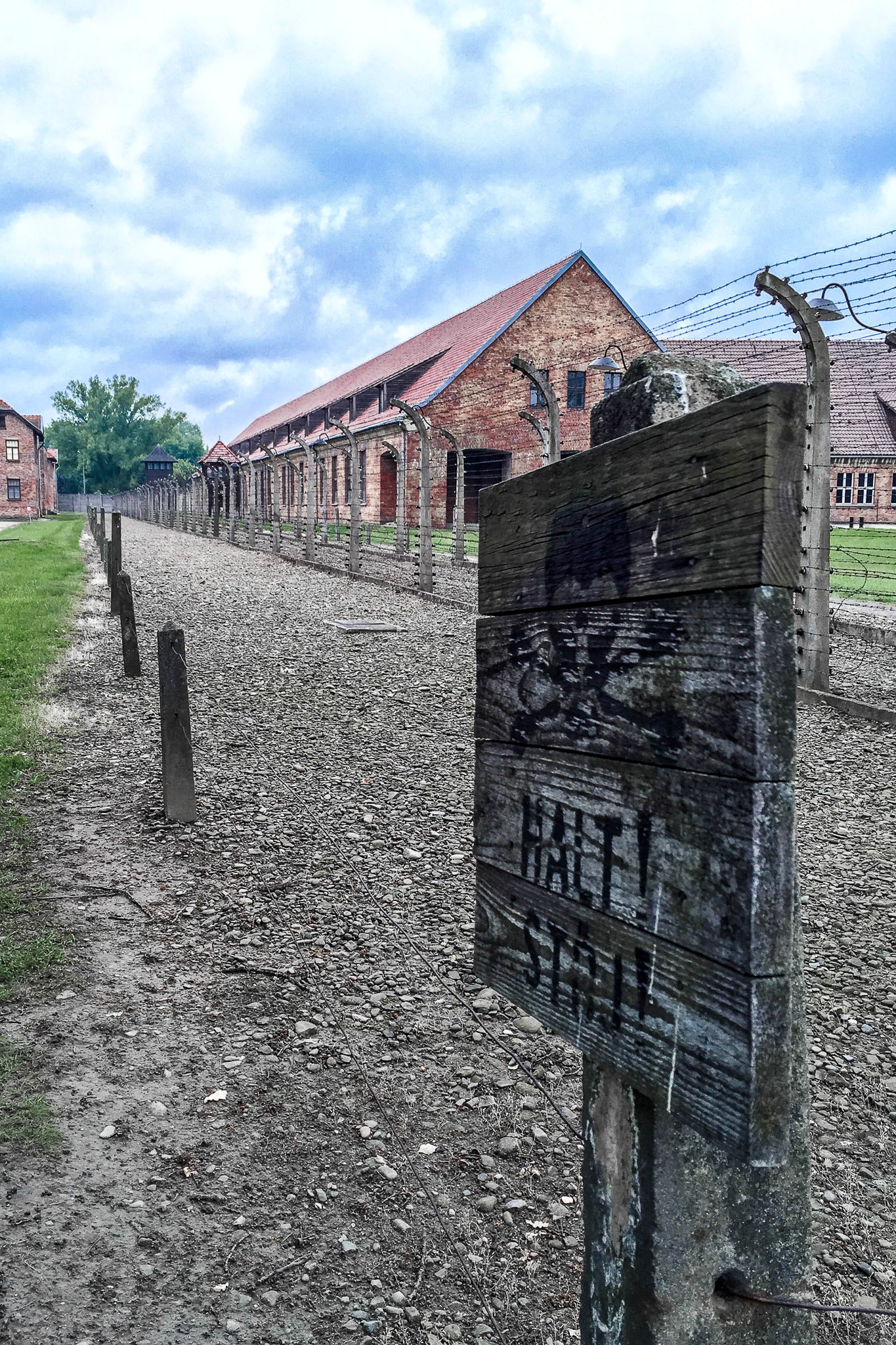 After we concluded our tour of Auschwitz I, we returned to the bus and headed down the road to the Auschwitz II-Birkeneau concentration camp, which was built as an expansion of Auschwitz as the war progressed. This camp is many times larger, but was mainly destroyed by the Germans in an effort to hide the evidence of their crimes, and by the Russians upon liberation of the camp. We toured an intact barracks, saw the untouched rubble of the crematoria, climbed the main guard tower, saw the remains of the destroyed barracks, and viewed the Holocaust monument. The memorial plaques read (in the languages of all the people who were imprisoned here): “For ever let this place be a cry of despair and a warning to humanity, where the Nazis murdered about one and a half million men, women, and children, mainly Jews from various countries of Europe. // Auschwitz-Birkenau 1940 – 1945”. 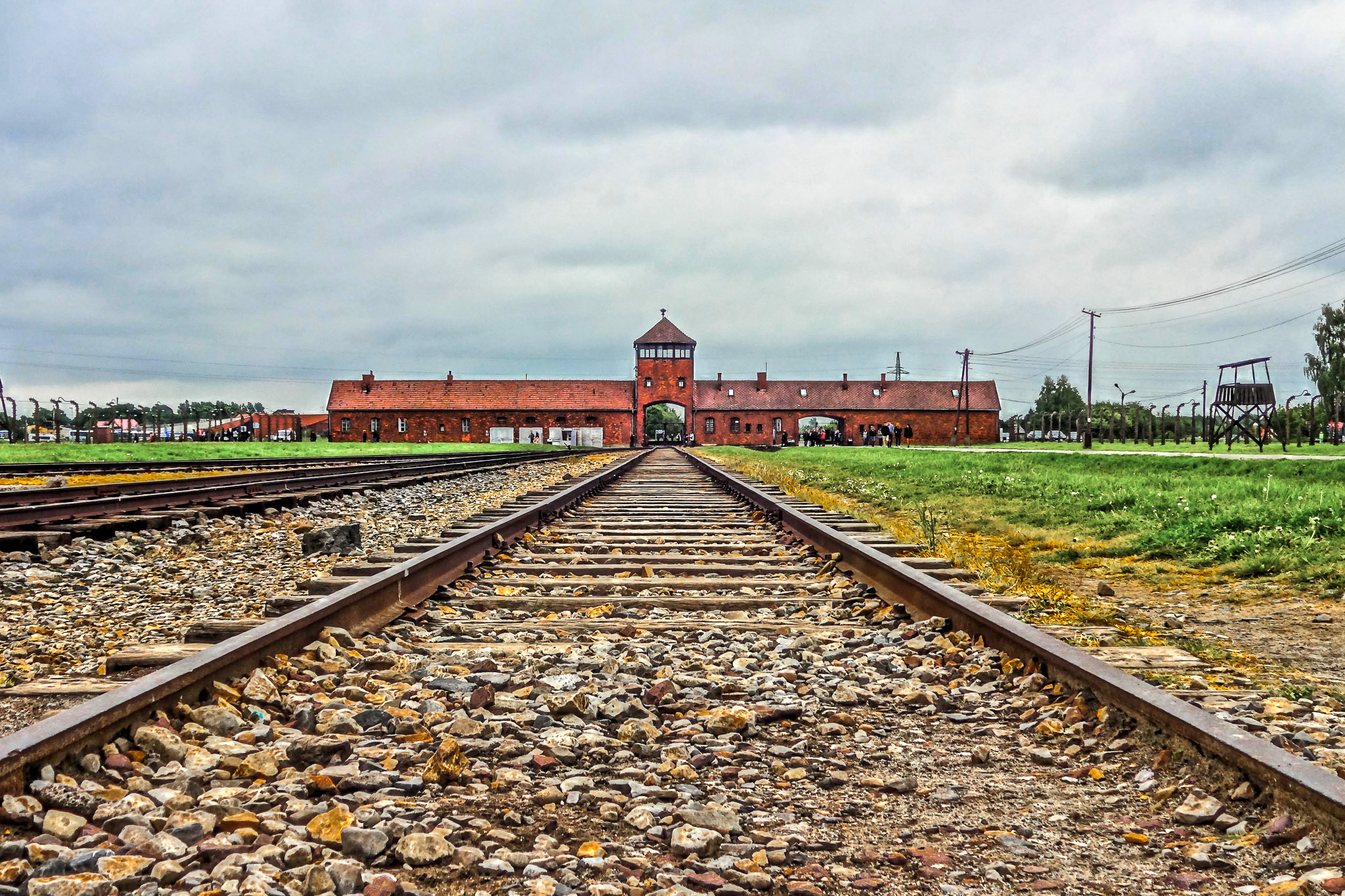 After we concluded our tour of Auschwitz II-Birkeneau, we again boarded the bus and started the 95 minute drive to Wieliczka to visit the Kopalni Soli Wieliczka, or the Wieliczka Salt Mine. On the way, we ate a boxed lunch that was provided by our transportation, which included a turkey sandwich, cold pasta salad with grilled chicken, and a chocolate wafer bar. Most of the students took a nap in the car, and we awoke to find ourselves in the Polish countryside approaching Wieliczka. Upon our arrival in the town, we took a quick break to grab some ice cream and use the restroom.

We entered the Wieliczka Salt mine and descended down the 372 steps to the first level of the mine, which is 64m underground. The mine is full of thousands of tunnels and chambers. In fact, it is so large that it could hold over 2,000,000 people at once. At its deepest point, it is 327m deep. The mine produced salt from the 14th century until 1996, when it converted to pumping groundwater. 400L/minute of water flow into the mine, which must be removed so the salt does not dissolve. While the salt is mainly pure, it is a grey color because it has some amount of impurities-loam-in it. Because of the high salt content, the air is much purer than on the surface, and contains many beneficial nutrients. For this reason, many patients with respiratory problems often live in the lower levels of the salt mine for a period of time. All the walls and floors throughout the mine are salt, and there are many intricate carvings and chapels throughout the mine made entirely of salt. Exhibits throughout the chambers document the history of this salt mine and the history of salt mining in general.

Throughout the tour, we descended by stairs to the third level of the mine, which measures 130m below the surface, and at the conclusion of our tour we rode an elevator to the surface. 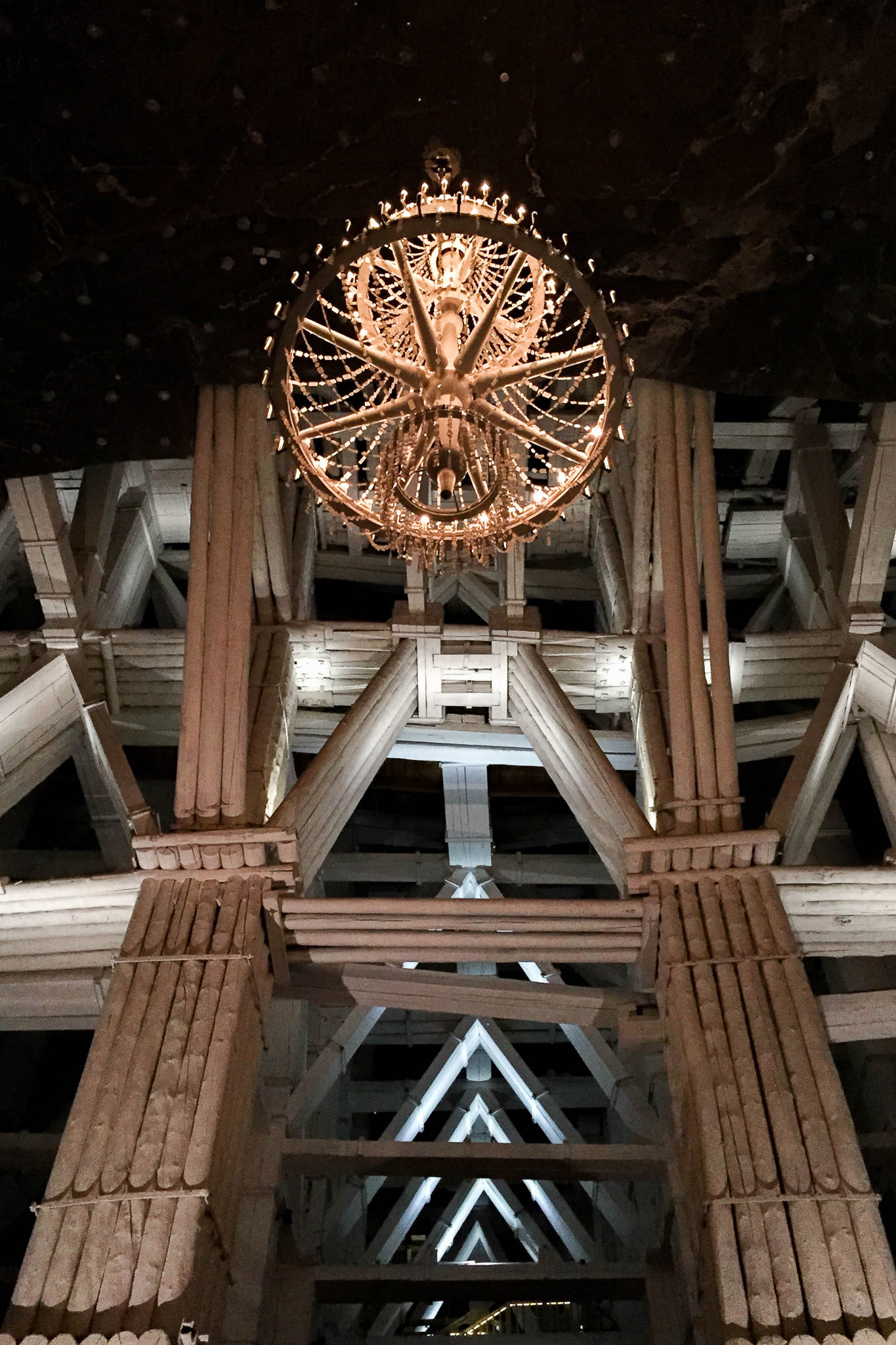 After we finished our tour of the salt mine, we traveled back to our hotel, and then headed out to get some dinner. We were hungry and tired and looking for a nice meal, so without traveling far from the hotel at all, we stopped at a restaurant called Gościniec. We decided to split a cheese plate as an appetizer, which turned out to be an excellent decision, as one might expect. The plate had brie, gouda, bleu, and some other cheese as well as dried cranberries and honey. 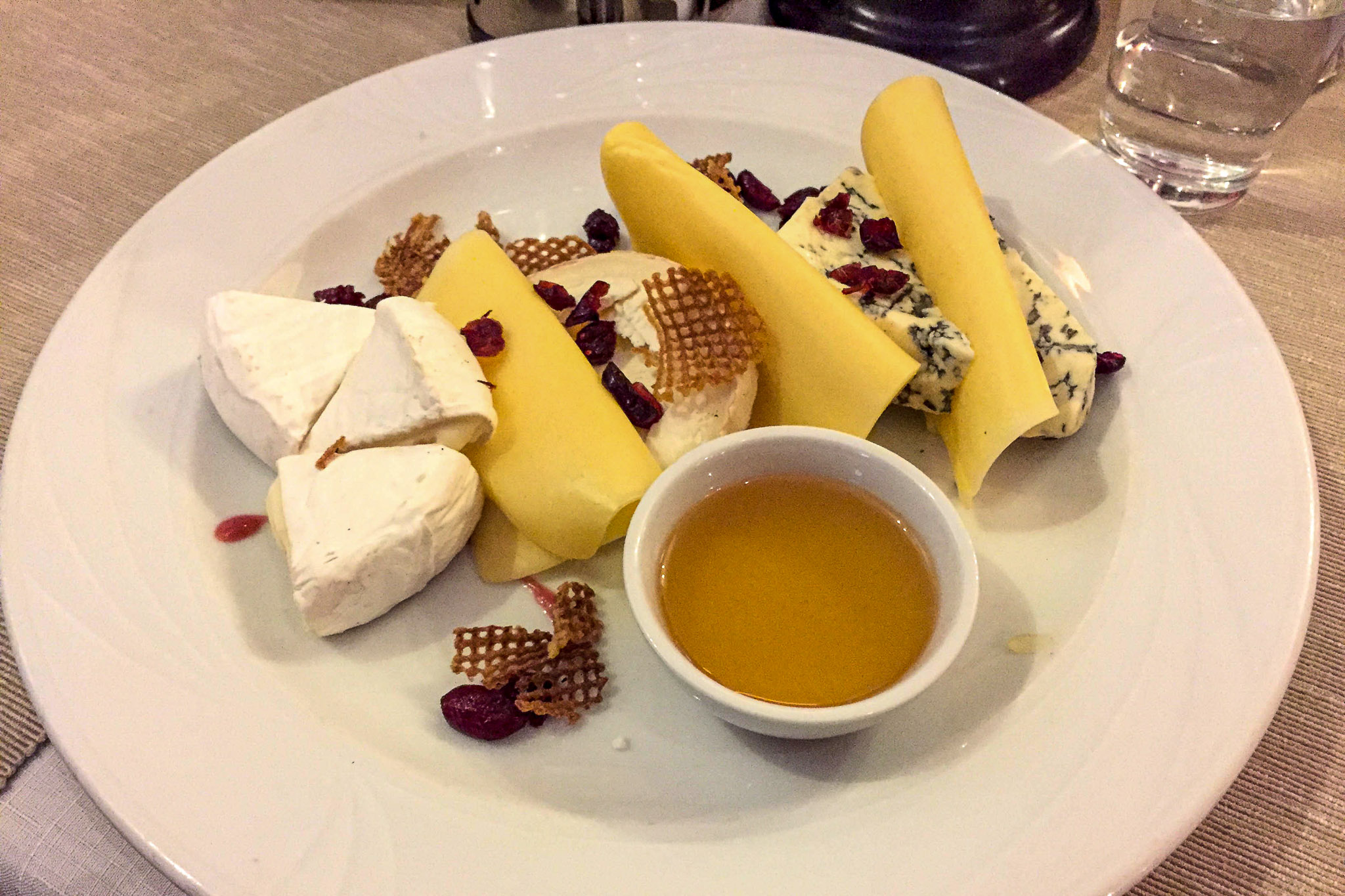 For our main course, I ordered Filet z Łososia z Pieczonymi Warzyvami, Flanem Ziemniaczanym Pumperniklem i Sosem Pieprzowym, or salmon filet with roasted vegetables, potato flan, pumpernickel bread, and peppercorn sauce. It was wonderful and definitely one of the best meals I’ve had this entire trip. I expected it to be rather pricy, but it turned out to only be about $11.

After dinner, the group of student I was eating with headed into the market and shopped/browsed for a while at the stores there. I purchase a very nice, hand-carved chess set, and several of the others purchased goods as well. Some of us stopped for ice cream, coffee, or waffles (like I had yesterday), but I opted to try something new. I stopped at a street vendor called MŁYN and ordered a crêpe with Nutella, fresh strawberries, and powdered sugar. After shopping for a while longer, we headed back to the hotel to recover from today’s exorbitant amounts of walking.

Today was a challenging day both mentally and physically, but it was one of the most enjoyable tour days of the trip. Tomorrow is our last day in Kraków, and it is a free day, so I’m excited to see what the day has in store!