Our first day in Switzerland started bright and early. Before I get to Luzern and the breathtaking Berner Oberland region, let’s talk about the airport.

Our flight landed at Zürich Airport (ZRH // Flughafen Zürich) at 07:40 EST. We navigated customs, and picked up our rental car (which apparently had gotten upgraded, so we ended up with a Mercedes-Benz A180!). The airport is in Kloten, a suburb of Zürich a ~20-min. drive north of the city center. We’ll be closing out our trip here, so I’ll wait to give you info about the city.

For now, we’re bypassing Zürich to venture south into central Switzerland. Guided by my iPhone’s GPS, we left the airport and took Swiss Motorway 4 south to Luzern. I was a little nervous at first, but quickly adapted to the Swiss roadways, with the help of some high-tech features on our rental car.

South from Zürich to Lucerne

We parked in a parking garage in the city center of Luzern, and walked about a block north to see the Lion of Luzern (Löwendenkmal). I’d seen pictures of this before, but no picture could do it justice. It was huge compared to my expectations, and the setting was truly remarkable: it was quiet, isolated, and shady – a truly relaxing and thought-provoking place.

The Lion of Luzern (Löwendenkmal) is a rock relief sculpture that commemorates soldiers from the Swiss Guard killed in Paris during the French Revolution, when peasants stormed the Tuileries Palace in 1792. Of the 900 soldiers, only ~100 survived.

Swiss Guards have served at foreign European courts since the 15th century. The most famous regiment is the colorfully-uniformed Pontifical Swiss Guard, which guards the Holy See (Vatican City), and serves as a bodyguard for the pope.

Mark Twain on the Lion

The Lion lies in his lair in the perpendicular face of a low cliff—for he is carved from the living rock of the cliff. His size is colossal, his attitude is noble. His head is bowed, the broken spear is sticking in his shoulder, his protecting paw rests upon the lilies of France. Vines hang down the cliff and wave in the wind, and a clear stream trickles from above and empties into a pond at the base, and in the smooth surface of the pond the lion is mirrored, among the water-lilies.

Around about are green trees and grass. The place is a sheltered, reposeful woodland nook, remote from noise and stir and confusion—and all this is fitting, for lions do die in such places, and not on granite pedestals in public squares fenced with fancy iron railings. The Lion of Lucerne would be impressive anywhere, but nowhere so impressive as where he is.

Leaving the serenity of the Lion, we walked uphill (emphasis on ‘up’ and ‘hill’; it was very steep) to the old city wall of Luzern. Faith and I strolled the parapets for at least thirty minutes, pausing to view old mechanical clocks in one of the towers, and turning our legs to Jell-O by climbing the steep wooden stair ladders in the towers.

Since the last night’s airplane dinner (which was mediocre, by the way) was long-gone, we decided to find some breakfast. We wound our way down the hill from the city wall to the river, first stopping at the Spreuerbrücke to see the river and stroll across the bridge before we sat down to eat a meal. 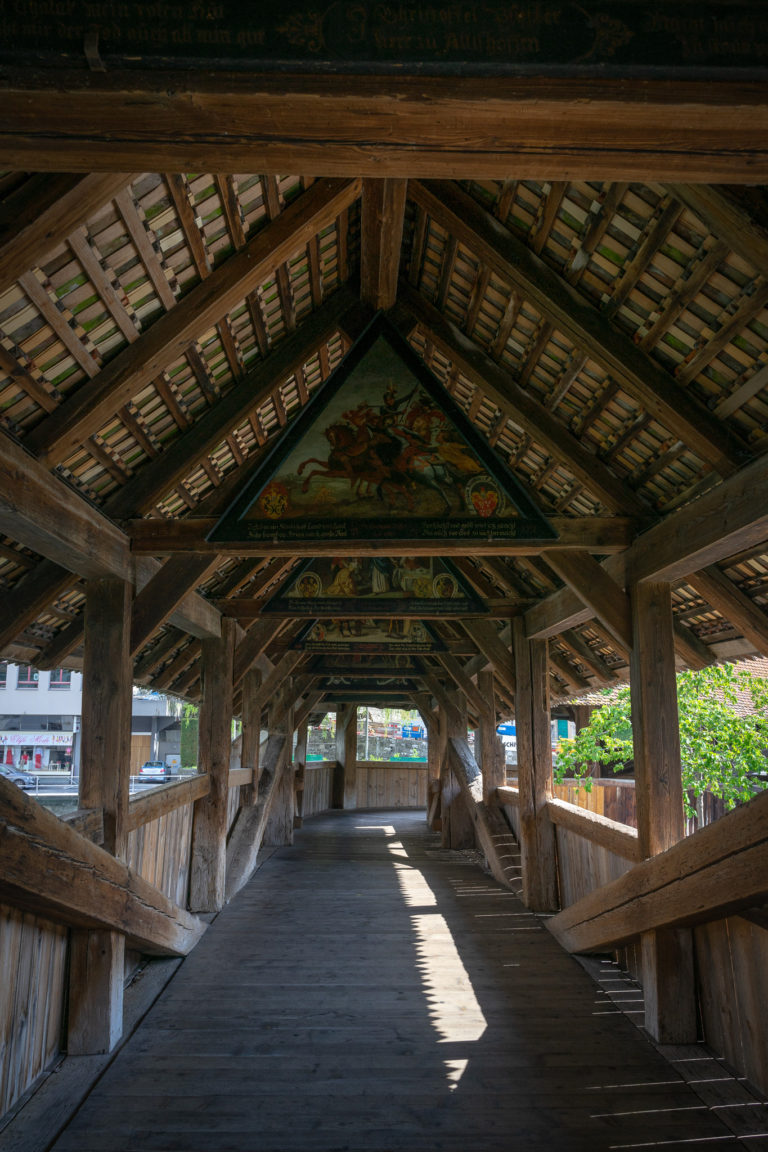 I’d already picked out a breakfast: Mill’Feuille, a German restaurant on the bank of the river. We split the Mill’Feuille Breakfast, which allowed us to pick three breakfast items to split, and gave us unlimited bread, fresh jam, and homemade chocolate-hazelnut spread.

For our entrées, Faith and I split the following:

For the bread, we got a selection of house breads, including honey wheat, challah, rye, wheat, and more we couldn’t identify. The jams were apricot-apple and rhubarb-cherry-apple, and homemade Nutella was creamy and delicious.

Faith also got a caffé latte, and I got a cappuccino.

After breakfast, we continued to explore the city. Almost all of the shops in Luzern were closed for Sunday, but we walked through much of the city anyways.

Luzern (also spelled Lucerne) is the capital of the canton of Luzern, and is the most populous town in central Switzerland, with ~82,000 residents. The river Reuss flows through the center of the town into Lake Luzern (Vierwaldstättersee, meaning “Lake of the Four Forested Settlements”). In French or Italian, the city name translates to “Lake of the Four Cantons”. Two mountains, Pilatus (6,995′ // 2,132m) and Rigi (5,897′ // 1,797m), backdrop the city. 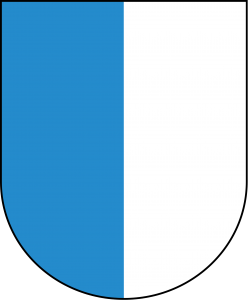 We walked to the Reussbrücke, just upriver from the Spreuerbrücke.

The Reussbrücke sits between the Chapel and Spreuer bridges, and offers a view of Luzern’s needle dam (Nadelwehr Luzern). The Nadelwehr is not intended to stop up the river; rather, it is supposed to regulate its flow, and isn’t intended to be watertight. Thin individual “needles” of wood can be added or removed by hand to form a sluice and constrict the flow of the river. 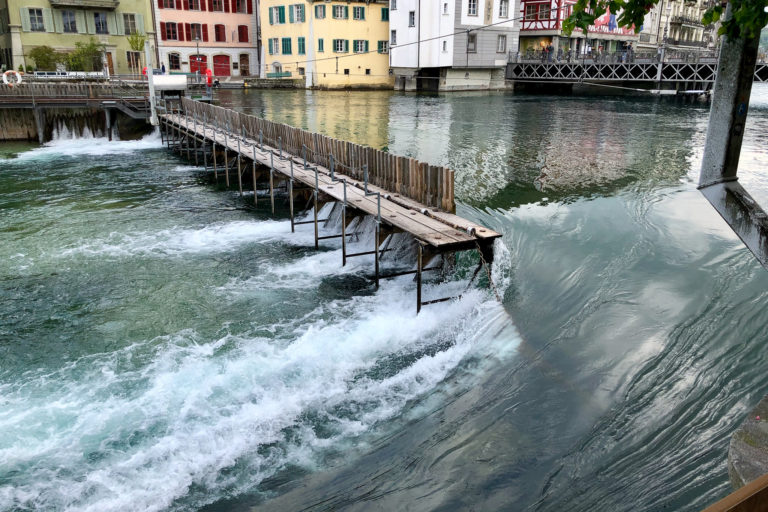 Finally, we came to the mouth of river, and the famous Kapellbrücke.

Named after the nearby St. Peter’s Chapel, the Chapel Bridge (Kapellbrücke), Luzern constructed the bridge in 1365 as a connection between the city’s fortifications on each side of the river. The Wasserturm, which translates to ‘water tower’ or ‘tower in the water’, actually pre-dates the bridge by 30 years. Over the years, the tower has been a prison, torture chamber, municipal archive, and treasury. Today, it serves as the bridge’s gift shop.

Kapellbrücke is the oldest wooden covered bridge in Europe, and the world’s oldest surviving truss bridge. A fire (likely cigarette-caused) destroyed 2/3 of the bridge in 1993, but the city restored it within eight months at a cost of CHF3.4million.

47 paintings that depict Luzern’s history originally filled the bridge’s inner frames. The 1993 fire destroyed 17 of the paintings, which dated back to the 17th Century.

As we were driving today, we often saw metal/concrete doors in the side of the mountain. With Mussolini to the south and Hitler to the north during WWII, the Swiss developed a plan to retreat into the mountains if the country was ever invaded. There are 44 bunkers in central Switzerland alone.

During the Cold War, the Swiss retooled their bunkers to defend against a potential Soviet invasion. Recently discovered documents reveal that both Nazi Germany and the USSR planned to invade Switzerland right before their subsequent downfalls.

Much of Swizerland, as we’ve learned, is “rigged to blow”. The Swiss have planted explosives in mountain passes, tunnels, and even rivers, ready to cause a collapse, rock slide, or avalanche to thwart attackers at a moment’s notice. I guess that explains why no army has successfully invaded the land in the history of the Confederation.

After we finished exploring Luzern and I finished fighting the parking validation machine, we continued our journey south towards the Berner Oberland region, but first we stopped in the tiny town of Alpnachstad. Alpnachstad is home to the world’s steepest cog railway, Pilatusbahn. Must to our disappointment, Alpnachstad station was closed today (we’re still not sure why), so we had to find something else to do. I’ll leave a description of of the mountain and the area below since it’s still very interesting. We did at least stop for a nice view of the turquoise waters of a nearby lake.

The village of Alpnach, which contains the ‘sub-village’ of Alpnachstad, is in the canton of Obwalden. Alpnach has a population of ~6,000. 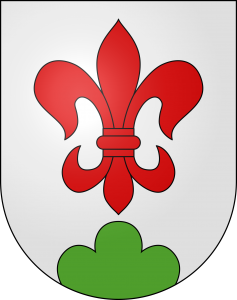 The Canton of Obwalden is the geographical center of Switzerland, though it has a population of only ~37,500. The earliest archaeological artifacts date the earliest settlements in the area to around 8,000 BC. 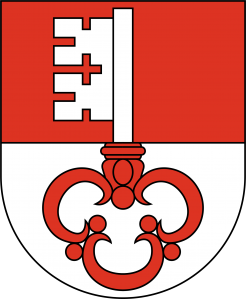 Mt. Pilatus is clearly visible from Luzern, and is one of the two dominating tourist attractions in the area – the other being Mt. Titlis and its glacier.

The mountain has several peaks, but the highest, Tomlishorn, stands at 2,812m (6,982′). One can ascend/descend the mountain via cog railway, panoramic gondola, or aerial cableway.

Next, we drove to Meiringen to see some Sir Arthur Conan Doyle-inspired scenery: the Reichenbachfälle (where Moriarty met his demise) and the Sherlock Holmes Museum. A very steep funicular took us to an observation deck at the falls; from there we climbed to the top. We spent about half an hour atop the falls, then took the funicular back down and drove a few minutes across the river to the museum.

Downtown Meringen has a Sherlock Holmes Museum, which we visited on a combined ticket (funicular + museum). It included a life-size recreation of the 221B Baker Street apartment, which was amazing – fully of detail and antiquities.

Next, we drove [past a yak farm or two] to Brienz to the Giessbachfälle, which drops 391m (1,282ft) into the Brienzersee, which is one of two lakes bordering Interlaken. Rather than hiking up the entire height of the waterfall, we picked a portion where you could walk behind the falls. 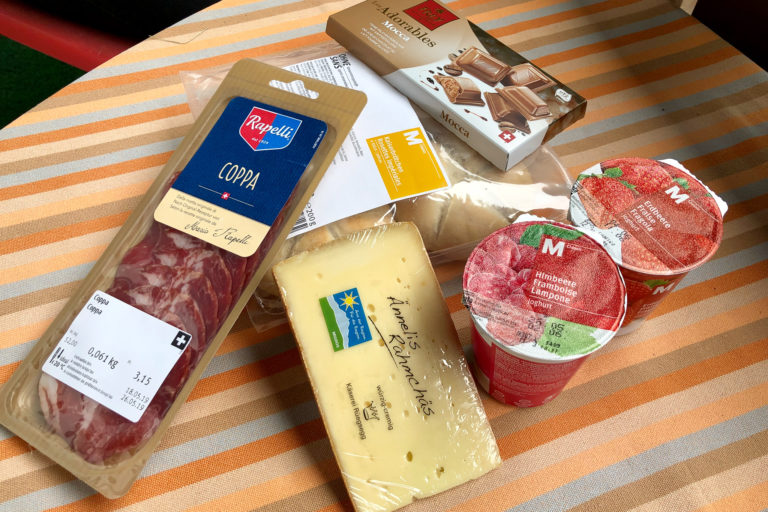 Now hungry again, we drove to Interlaken to attempt to find some dinner. Everything was either closed or very expensive, so we stopped at a Migros grocery store and bought some cured meat, local cheese (Alpkäse), yogurt, rolls, and chocolate for dinner. We drove about 15 minutes into Lauterbrunnen, checked into Hotel Oberland, and enjoyed our dinner on the balcony with a fabulous view of the Staubbach Falls.

Hotel Oberland will be our home for tonight and tomorrow night. Below are some pictures of the hotel, our room, and our view.

As promised, here are two maps showing where we have been today. [Click to enlarge.]

Early tomorrow, weather pending, we’ll take the train from Lauterbrunnen up towards the Eiger via Kleine Scheidegg. Hopefully the weather will cooperate…if not, we’ll come up with something else to do. 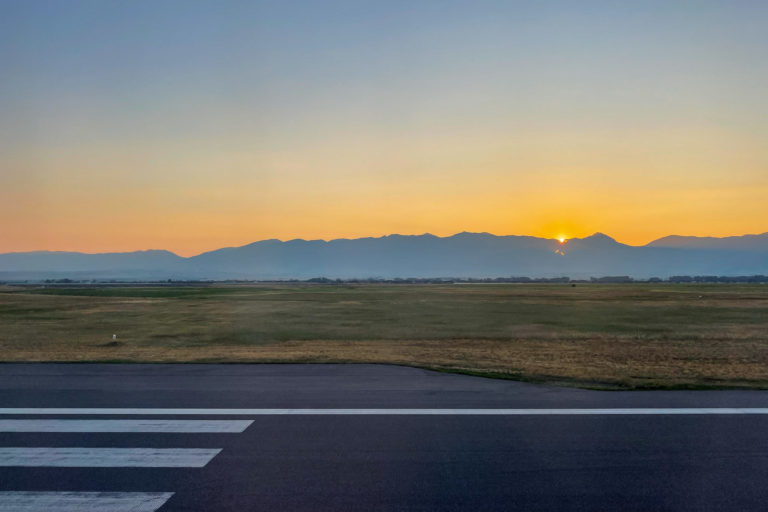 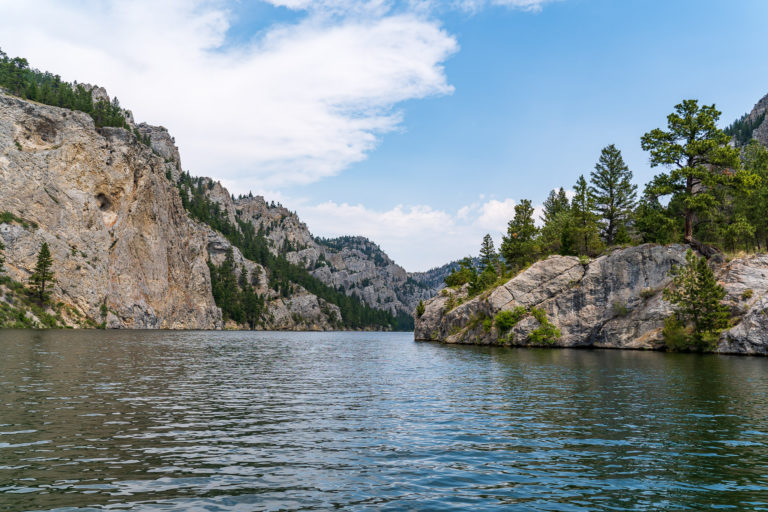 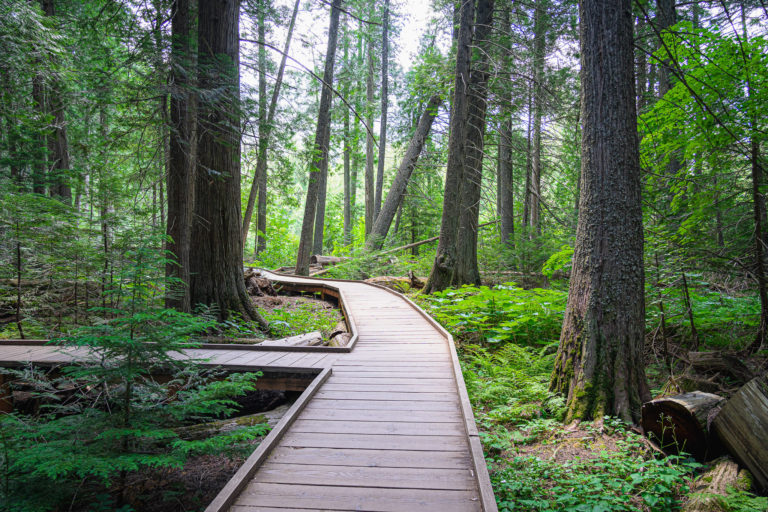 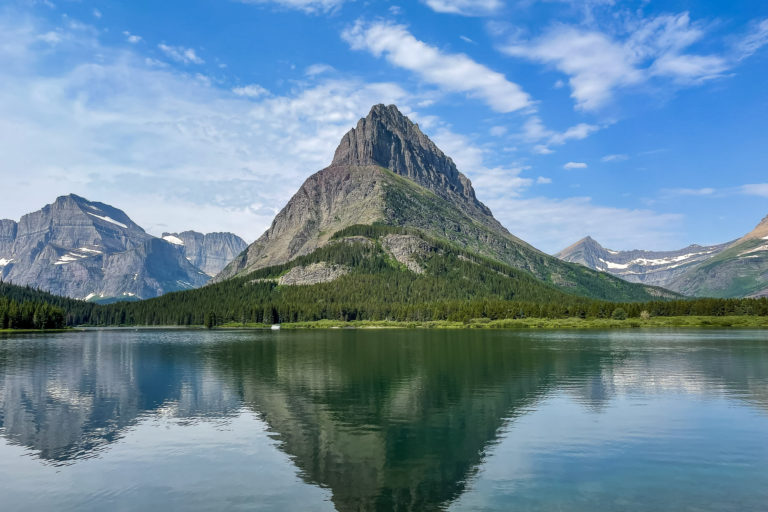 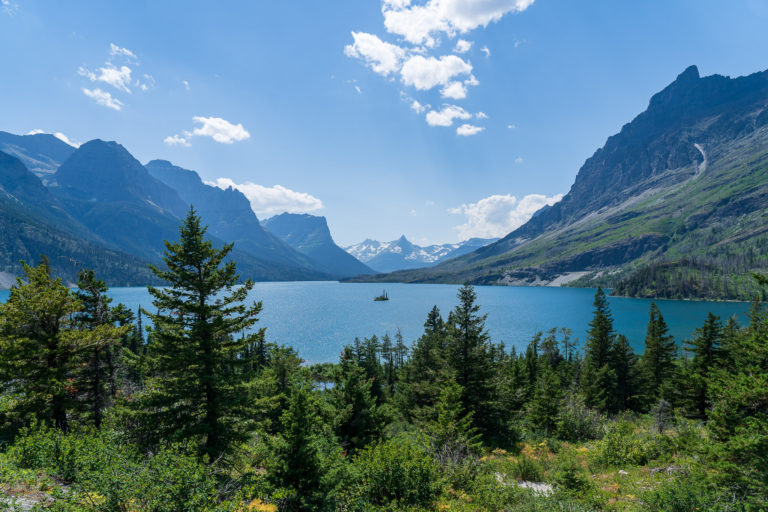 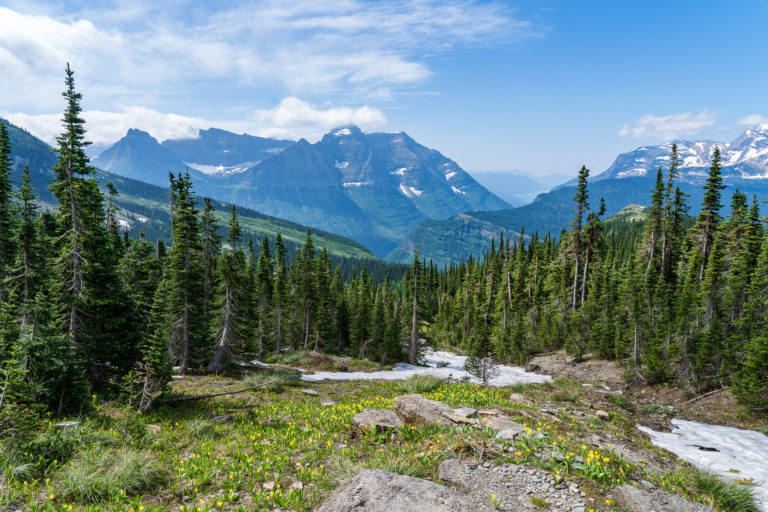